The term tribology was coined in 1966 in the famous report on the cost of friction, wear and corrosion prepared by a British committee led by Prof. Peter Jost [1], composed of the word in Greek tribes which means rubbing and the logos subfix, which means study of. On the other hand, the word tribophysics was used around 1940 in Melbourne Australia by David Tabor and Philip Bowden to give name to its research laboratory [2]. 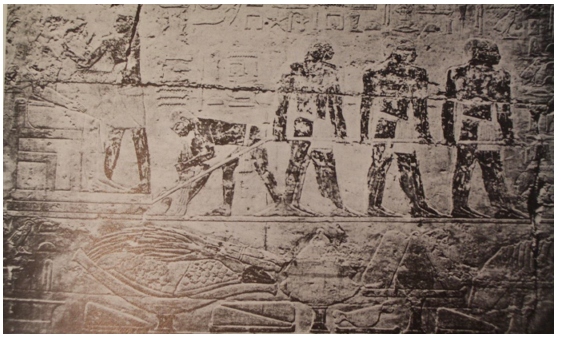 Photo: Figure 1. Engraving of the first tribologist that has been found, he can be seen to be applying a lubricant in the transport of an Egyptian statue, 2400 before Christ.

However, the application of tribology goes back to the movement of large blocks to build the pyramids and the placement of statues. The first known tribologist has been found in an Egyptian engraving from 2400 BC, figure 1, from Dawson's book, History of tribology [3]. Following the report of Prof. Jost the importance of tribology has been recognized, and many national tribological societies have been established, as in the case of German where seven divisions have existed for last few decades. On the other hand in the United States in 1944 the American Society of Lubricant Engineers was founded [4] which in 1987 became the Society of Tribologists and Lubricants Engineers, STLE, serving more than 10,000 individuals and 150 companies and organizations, with 40 local sections and 23 technical committees. These numbers reflect the importance of tribology. A significant advance in the reduction of friction was achieved with the invention of the wheel in around 3000 BC, in Mesopotamia, and Central Europe. The inhabitants of pre-Columbian Mexico knew the wheel [8-9], as proven by several wheeled toys exhibited in Mexican museums such as the Xochicalco site museum. However, they did not use it as a means of transport due to the lack of traction animals and the topography of the land. A comprehensive study of the technical and scientific advances of tribology should, of course, include the contributions made by Leonardo Da Vinci more than 500 years ago, Guillaume Amontons in 1699, Hertz, the contributions of Reynolds to the understanding of lubrication, Bowden and Tabor and the wear studies of Archard and Rabinowicz among others. It is very important to know the background of the state of the art, but more detail is beyond the purpose of this brief proposal.

In Mexico since 2011, two meetings of the tribology researchers of the country have been held, and these where organized by the technical manager of this proposal. In these meetings, the teams and research topics of each participating institution where described and discussed. Likewise, activities to be developed were proposed, two of which have resulted in the establishment, in 2012, of the Tribology Symposium as part of the International Conference on Surfaces, Materials and Vacuum of the Mexican Society of the Surface Science and Technology and Materials. Secondly, the foundation of the Mexican Society of Surface Engineering and Tribology (SOMICYT), of which Dr. Joaquin Oseguera Peña is president. Lastly, was the formation of the Surface Engineering and Tribology network, REDISYT, which today has more than 90 registered members.